With all the planned protest movements, often by young students, with a high potential for violence in the offing lately, everyone is worried about the ability of the police to handle it, even with the aid of the National Guard. Much speculation has gone into such questions as "How much damage will they do?" and "How many will get killed?" These aren't idle questions, considering such violent terrorist organizations as Antifa and Islamic State, the latter having many of its members in this country and Canada.( Collapse )

Edward Klein's All Out War: The Plot to Destroy Trump is a deep and disturbing analysis of the forces aligned against President Donald J. Trump, his policies, his family, and anything and anyone else connected with him. Robert A. Heinlein said that when a culture loses its manners, it's dead. What happens when a culture -- a whole country -- not only loses its manners but its mind? The term "Trump Derangement Syndrome" was created for the hysterical, vicious, vulgar, and dowright libelous attacks on President Trump and those around him, and it fits. Nothing like this has ever happened before in American history. The mainstream media allow the use of obscenities and other vulgarities whose public use would never have been allowed in the past -- but now they are commonplaces, at least when the subject of the conversation is Donald Trump. The Democrats go right along with it, and, along with the media, have been fanning the flames of public hysteria and animosity toward Trump -- and encouraging violent protest groups such as Antifa to run riot in this country, doing physical harm to others, killing one woman, and causing catastrophic damage to property.( Collapse )

This is not about tragedy, nor horror, though it has elements of both. Bear with me through the first of it, reader, for the last is -- well, you'll see for yourself.

Decades ago, when I was in my teens or even slightly before then, I ran across an article in The Reader's Digest -- I think it was the Digest about a horrible road accident. The firemen who responded to the call found that a sedan containing at least eight people had collided with a stanchion at top speed, bursting into flames that consumed everything in it that could burn and blackening the rolling Detroit iron that made up its frame. The fire was due to a burst gasoline tank; gas burns hot, and the damage done by that fire showed it. There were three bodies in the front seat of the car, five in the back, all of them apparently charred to the bone.

One of the firemen looked into the back seat of the car, checking to see if there was anything that could be done for the poor things in that seat. They had all been welded together by the flames, all one long piece of deeply charred spam barely enclosed by that seat, given how big they had been in life. Maybe they had come from a party. Whatever, the party was over for them all now.( Collapse )

Some things have changed radically since I was a child. One such change has to do with food allergies. Back when I was a kid (I was born in 1945), I could eat damned near anything without problems. I'd *heard* about food allergies, usually a reaction to strawberries, which could cause a rash, but other than that people then didn't seem to have such allergies. (Oh, when we had tetanus shots, they asked us if we were allergic to eggs. Nope.) Now, and over the last couple of decades, again and again you come across news of some child dying, or nearly dying, of exposure to peanuts; problems with gluten; and a host of others. What's HAPPENED to the last couple of generations? Toxic GMO products? Food additives? Anyone out there know of anything that seems to be linked to all these food allergies, which are a growing problem?

I just emailed four Senators -- my own and Senators Rand Paul and Ted Cruz -- and the President about organized stalking and asked them to check it out. I wonder what will happen to me in consequence.

June Ti, No Ordinary Stalking: A Look at Organized Stalking and Electronic Harassment 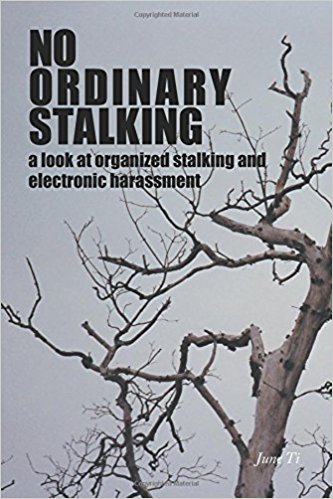 We're all familiar with Internet trolls, psychopathic individuals who delight in harassing and tormenting members of social media. Usually they can be avoided by changing one's ISP, getting off the Internet, closing down one's computer, and so on. But what about organized groups of trolls who penetrate into every part of the victim's life, effortlessly breaking and entering into their physical homes; destroying all their relationships with others, from close friends to employers and superiors; maiming and murdering their pets; and otherwise making their lives hell for months, even years? Once you realize what you are undergoing and those who perpetrate it, complain to others about it and they will come to believe that you are over imaginative, paranoid, even delusion. It is sometimes possible to flee them, but not forever. Their end-goal is the complete destruction of you and your entire life, the demolishment of all your achievements, and the destruction of all you hold dear.( Collapse )

One good, weird dream, the other a nightmare.

The other night I had the cruelest dream. Something was in my mind, telling me how ugly I was, how stupid I was, showing me images of parts of my face and body to back it up. I felt absolutely devastated, but there were people in the dream who didn't seem to notice, and perhaps liked me. Some part of my own mind beating me up again? A psychological cancer?

This morning I dreamed I was in a huge building or group of buildings that were intended to keep everyone in there from leaving. It was either a prison, a state hospital, or both. I was with a group of people in there who intended to get out. We found a door to a road outside, and left. But we were still on the grounds of the building we had been in. So we entered another building and took an elevator to the top, then started checking out the rooms and corridors there. We looked up into the sky and saw huge attack jets hovering over it, perhaps ready to discharge missiles into it and the place we had been. Then one of us, a young man, led to us to eastern side of the building, where he jumped out the window and floated easily to the ground. I followed. On reaching the ground I kept going east. I went eastward from building to building in what was turning out to be a very large city, and finally came to a river running between two buildings and down to the sea. I jumped in the river and ended up in the ocean, free and out of danger.

Dedicated to the memory of Chev. Gary Scott Csillaghegyi,
1942-1995 e.v.
You were the wind beneath my wings.

“Euclid alone has looked on beauty bare” –
So the poet said.
– She lied. I’ve sat with you
Long hours in a golden evening,
Looking upon your face,
Into your eyes, into your being.
The poet lied. I know.( Collapse )

The Origin: The Founders of the United States of America.

The Origin: The beginning, and a new beginning.

The Origin: Out of which can come -- ANYTHING!( Collapse )
Collapse